Neoline is proud to announce its new product – the world’s first hybrid with a unique international radar platform for detection of all the radars – X-COP 9100s.
It is the world’s first hybrid which detects Multa Radar CD and CT. For the user’s convenience the device detects Multa Radar in a special M band, so that the user will be warned of such radar.
The device has an integrated ultrasensitive module EXD Plus. It is particularly effective in the Turbo mode and provides maximal distance of police radar detection.
Neoline X-COP 9100s has a particular platform for warning about low-power radars in K, Ka bands such as Gatso, Multanova 6F, Multa Radar, etc. Additionally the device has a highly effective protection against Spectre 4 and Spectre Elite RDD devices.
To eliminate false alerts, particularly from the blind spot detection sensors of other cars, Neoline’s own development is used – Z-signature filter. Unlike similar technologies there is no false blocking of real police radars.
New device has built-in radar and camera database which includes data of more than one hundred thousand radars around the world (Europe, USA, Israel, Middle East, Turkey, Australia, etc.). The database is updated regularly on neoline.com. 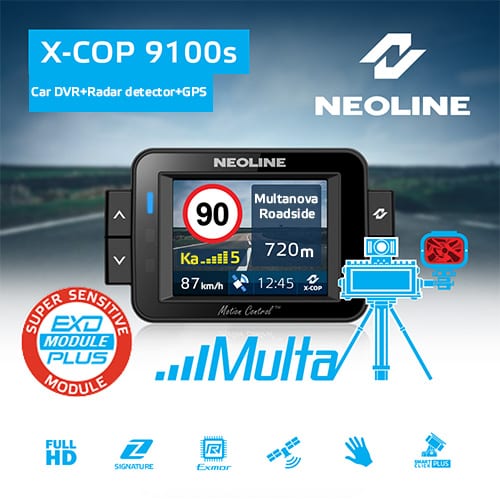 Change old one to new one!
More information

Any cookies that may not be particularly necessary for the website to function and is used specifically to collect user personal data via analytics, ads, other embedded contents are termed as non-necessary cookies. It is mandatory to procure user consent prior to running these cookies on your website.

10% FREE DISCOUNT
Join the Neoline subscribers' team and receive a 10% discount code to your email!
SUBSCRIBE